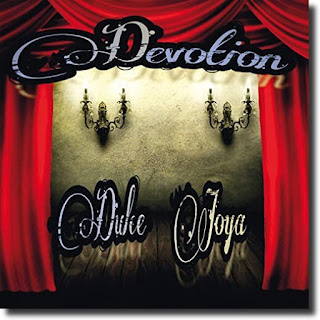 Devotion is the sophomore album by classically trained pianist and composer, Dulce Joya Léon, and follow-up to her glowing debut, Reality of Dreams. Having begun her musical studies at age six at an arts school in her native Cuba, she went on to study, perform and teach music in Colombia, Austria and Germany where she currently resides.

Upon listening to Devotion, it’s easy to imagine the composer playing her piano in a Victorian-era mansion while surrounded by candlelight. As if being transported back in time, Dulce Joya seemingly invites us along for a dramatic romance novel experience in which she pours out her heart and soul through her fingertips.

She springs right into action with the rapidly moving and fiery opener, “Passione Nocturnale”, of which true to her signature style, builds and winds steadily up to a climatic peak, then softly descends a glittery path, repeating this theme with variation.

Additionally, her compositions are aptly-named to convey the passionate drama of her playing style. Among these include highlights like “The Sound of Your Voice”, a more ballerina-like piece that spins and twirls up and down the registers – sometimes delicately, and at other times forcefully.

Likewise, there's “Forgotten Worlds”, a boldly contrasting number that mysteriously moves among contrastive minor and major keystrokes. She also touches on the metaphysical with “From ancient Time we meet again”, which seems to relate a tale of two lovers reuniting after many eras apart. And finally, the intriguingly named “Mistery among Candles” makes for a tantalizing conclusion to a passionate love story.

A simply underrated genius with regards to both her musical narration and compositional skills, Dulce Joya Léon’s sheer dedication to her art comes through with every note. A seemingly unselfconscious composer who performs straight from the heart and expresses herself authentically, she's also one of the most impressive pianists I've discovered recently in contemporary classical music. Coupled with the fact that Dulce Joya is such a masterfully talented melody-maker and arranger, these qualities undoubtedly make for an unforgettable recording of its kind! ~Candice Michelle

Available at Amazon and other music retail & streaming services. For more information, please visit the artist's website.
at April 07, 2020