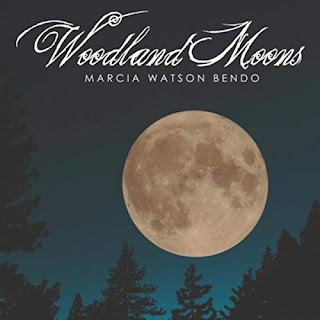 Woodland Moons is the remarkable debut album from composer and multi-instrumentalist Marcia Watson Bendo. A native Oklahoman currently residing in Texas, she was inspired to create an album based on the full moon names of the indigenous Woodlands People, the Anishinaabe. Herself a member of the Potawatomi tribe of whom comprise part of this larger group of indigenous peoples of upper North America, Bendo has mastered the art of playing on Native American-style flutes, which appropriately lead this album with captivating melodies.

Set to twelve contemporary arrangements accompanied by keyboards, strings and percussion, Bendo takes the listener on a fascinating musical journey through the seasonal year, with her lovely compositions evoking a serene sense of innocent wonder and connection to nature.

“Fallen Leaves Moon” is a lovely opener wherein Bendo’s graceful flute melody takes the foreground while an accompanying piano melody just underlies it, as the other classical instruments seemingly create an aural backdrop of gently cinematic orchestration. Following next is “Planting Moon”, a more dainty and whimsical piece that moves at a quickened waltzing pace. As with many of Bendo’s compositions, this one brings-to-mind that of watching a Nutcracker Ballet style performance.

Many vivid scenes are conveyed throughout this album, such as on “Midsummer Moon”, which employs the sounds of breezy tones and sprinkling chimes as they effectively paint images of fireflies dancing in a midsummer night breeze; or “Yellow Leaves Moon” which opens mysteriously with spiraling minor-key notes that seemingly mimic leaves whirling in the wind.

Songs inspired by winter are often my favorite on an album, and the enchanting “Snow Moon” is certainly one of my favorites on this one. Featuring an ensemble of flute, harp and keyboards, Bendo uses these instruments to create softly twinkling effects that seemingly portray a wintry scene of moonlit snowflakes gently swirling in the wind. Closing out the album is the lively and rhythmic “Berry Moon”; set to a dynamic waltzing pace, this piece conveys a cheerful mood of renewal and celebration.

One thing I both noticed and enjoyed while listening to this album, is how my attention always seemed to be drawn upwards – at the moon, the stars and the treetops. It would seem the composer wanted to evoke a sense of fascination and joyful intrigue in her audience, and she’s certainly excelled at that.

Sure to be cherished by many listeners, Woodland Moons beautifully embodies the often hard-to-recapture mystique of many earlier “new age” music albums – particularly those in the style of Windham Hill Records or the outstanding collaborations of R. Carlos Nakai and Peter Kater. Additionally, Marcia Watson Bendo’s notable integration of classical motifs would make her music especially well-suited for ballet and other visual dance performances.

Warmly engaging and uplifting, yet overall subtle enough to play in a spa setting, Woodland Moons is a superb album and can only signal more wonderful things to come from this artist! ~Candice Michelle