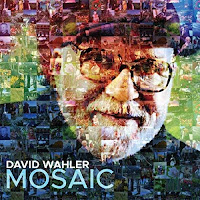 I’d initially became acquainted with David Wahler’s music upon hearing a couple of tracks from his mesmerizing 2012 album, Antiquus, and I’ve been intrigued ever since. Created using a variety of keyboards and synthesizers while weaving organic nature sounds throughout, Wahler’s style could essentially be described as electronic new age music that’s noticeably rooted in the classic and pioneering sounds of the 80’s and 90’s, yet feels freshly modern and up-to-date. Crafted in a similar style to his Spiritus (2015) and A Star Danced (2010) albums, Wahler’s latest release, Mosaic, is a blissfully beautiful album comprised of eleven softly melodic, serenely soothing and subtly romantic compositions that often bear elements of ambient and classical styles.

The gorgeous opening title track, “Mosaic”, possessess subtle touches of Tangerine Dream with its flowing progression of sequenced layers – albeit comparatively more gossamer and “mistier” in texture – as synthesized vocal intonations mysteriously weave in and out of its sensual soundscape. Wahler perfectly sets the tone for the rest of the album with this spellbinding composition, which appropriately lulls the listener into a relaxing yet imaginative, almost daydream-like state. Following next is “Afterain”, which employs nature sounds, wispy vocal effects and sparsely drifting keyboard notes. Wahler then moves into slightly cinematic territory with “A Promise to Keep”, which highlights a more prominent piano melody. “A Child of the Universe” is another favorite that brings in elements of Celtic fantasy and neoclassical motifs. Here, celestial choral voices along with piano, flute and harp-like textures exchange leads beneath overarching strings. Also noteworthy about this piece (and others) is that Wahler exhibits welcome restraint in places where other musicians might go for bombast.

“August Cloud” is a more intimate passage with subtle hints of mystery – while “Elysian Dawn” feels more mythical with its birdsong, harp textures and lone female voice. “Heading Home” begins with a solo piano figure that is eventually joined by other synthesized elements. This lovely piece is reminiscent of some of the works released on the Narada label in the late 90s and would have fit perfectly on one of their signature compilation albums. “Sakura” follows in a similar vein, although quickening the pace a bit and likewise, displaying a beautiful melody. The aptly-named “Lone Sky Night” is another favorite, as it imparts a solitary sense of wonder, with its gently rolling waves and spacey, twinkling effects evoking images of a starry sea. “Fou D’ Amour” is pleasantly reminiscent of 80s-era “new age” synthesizer music – and in particular, Vangelis, with its cinematic elements. And lastly, the haunting closing piece “Why?” starts out quietly until a gentle rhythm comes in accompanied by vocal effects.

One thing that has consistently struck me about David Wahler’s music is how he crafts his compositions with just the right amount of ambience in the form of melodic sparseness and atmospheric moodiness, which lends an overall quality of mystery and shadowiness that helps to counterbalance the music’s brighter and more overtly cinematic elements. The end result is a listening experience that’s beautifully enchanting – with Mosaic placing very high on my recommendations of quintessential "new age" albums! ~Candice Michelle