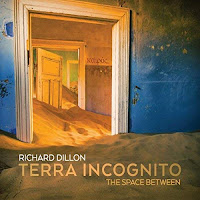 Although Seattle-based pianist and composer Richard Dillon has released several solo piano albums, he broadens his musical horizons substantially on his latest release entitled, Terra Incognito: The Space Between. Comprised of 24 compositions spanning a lengthy 75 minutes, Dillon explores new age, neoclassical, ambient, techno, folk and pop styles of music throughout. Varied, colorful, and often experimental, Terra Incognito effectively aims to highlight Dillon’s versatility as a composer – and as a result, most listeners are likely to appreciate some parts of the album substantially more than others.

“Whalesong Redux” introduces the album with an understated orchestral arrangement featuring the distinct sounds of whale song – immediately bringing-to-mind an old documentary film about the ocean, to which this piece would be well-suited. Slipping into a more tranquil mode, “Green Flash Redux” infuses relaxing ocean waves with drifty piano and electric guitar. One of my favorites on the album, the fluid and dreamy quality of this piece can be likened to sailing down a lazy river. Two outstanding interlude-type ambient compositions follow next – “The Space Between” and “Dust Devil”, which pair together nicely. Conveying a haunting minimalism via suspended strings and sparse piano notes, “The Space Between” possesses an intriguing suspense that pleasantly brings-to-mind some of David Arkenstone’s more minimal-ambient work. Equally compelling, “Dust Devil” incorporates subtle tribal-ambient elements with its fusion of echoing percussion amid a shapeshifting soundscape.

The rest of the album unfolds with oft-unexpected and widely-varying stylistic twists and turns throughout that can result in some of the pieces seeming wildly out-of-place. For example, “Ice Dancer Redux” is an overly cheery and bubbly instrumental piece set to a noticeable drum machine – while “Color Me” is a lyrical vocal piece accompanied by a whistling chorus reminiscent of a radio jingle or children’s show. These along with a couple of other similarly quirky, pop-oriented compositions felt like unnecessary inclusions on this already lengthy album.

Nevertheless, other truly remarkable gems are certain to be found on here, such as the whimsical “Leonardo’s Flying Machine”, with its celestial voices that hover among echoing piano chords, as it seemingly conveys a magical winter fantasy. Likewise, “Lead Kindly Night” is another mesmerizing piece that features a lovely Celtic bent. Here, ethereal female vocals are delicately brushed by subtle strings amid a backdrop of glistening bells. Another notable standout is the cinematically spacey “Voyager” with its minimal ambient-piano arrangement that simultaneously conveys both an awe-inspiring and pensive mood.

After hearing what Richard Dillon is capable of as a musician, I must confess, I’d especially love to hear an album comprised entirely of the more ambient and soundtrack-style pieces that frequent this release, as these moments are certainly among the most compositionally innovative and sonically mesmerizing herein. This is a strong suggestion on my part, as I feel this unquestionably talented artist has tapped into a reservoir of potential brilliance that’s worth further exploring. Yet, the full experience of these stellar compositions is somewhat hindered by the inclusion of rather peculiar and odd-fitting compositions alongside them. On the plus side, Terra Incognito has given me an opportunity to discover a musical side of this composer that I was previously unfamiliar with – and as a result, I look forward to hearing much more of it! ~Candice Michelle