Spotlight: Add Colours To My Sunset Sky by Trine Opsahl 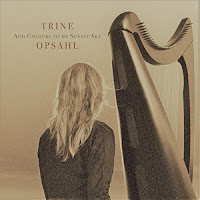 Trine Opsahl is a Norwegian-born harpist who moved to Denmark when she was six, where she currently still resides. Having released three studio albums to date, Opsahl’s previous two albums include her 2012 debut, Somewhere in a Hidden Memory, along with her 2015 follow-up, Unbroken Dreams, which was recorded with her cellist daughter Josefine. Her third album, Add Colours to My Sunset Sky, features thirteen compositions that similarly possess lovely titles evocative of nature – all comprised of soul-soothing harp melodies which are often complimented by subtle ambient textures and enchanting wordless vocals.

“Songs from a Mountain I” introduces the album with a droning, harmonic undercurrent and improvised melodic humming, which feels resoundingly earthy and evocative of the desert. Next is “Sunshine on a Stormy Path”, which initially begins with sparse string plucks, before blossoming into a more robust harp melody of reverberating silken chords. This is followed by “Rosebed Garden”, a lighter, airier piece that possesses a somewhat sweeter celestial feel. The next piece, “In A Grain of Sand”, is one of my personal favorites. Beautifully laced with a Celtic touch, wordless ethereal vocals drift along dreamily in tandem with the magical melody emanating from the strings.

The rest of the compositions likewise subtly vary between more delicately buoyant and sunny instrumentals like “Lightly Dance into the Morning” and “Add Colours to My Sunset Sky”, to more hauntingly reverent, vocal-imbued compositions such as “Songs from a Mountain II” and “Diving into an Ocean of Love”. The album ultimately concludes much like how it began with the final piece, “Graceful like a River”, on which the revisiting of the harmonic drone and accompanying vocal intonations seemingly ground the listener back to the earth.

One of the oldest instruments in the world with its origins in the Near East, the harp has always possessed a seemingly mythical and otherworldly quality about it – having long-ago found its way among many cultures, where it's often depicted in ancient art. Likewise, Trine Opsahl aptly transfers this empyrean and primeval essence through her music, as her compositions variably touch on Celtic, Mesopotamian and other old-world signatures. Wholly beautiful and deeply serene, Add Colours to My Sunset Sky will find much appeal among fans of meditative harp music, including works by Áine Minogue, Claire Jones and the like! ~Candice Michelle

For more information please visit the artist's website. This album is also available on Amazon, iTunes, CD Baby and Google Play.
at March 14, 2018