Spotlight: Let There Be Light by Tom Moore & Sherry Finzer 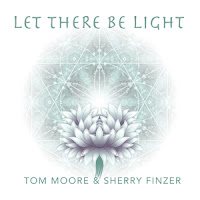 Let There Be Light is the second collaborative release by multi-instrumentalist Tom Moore and international flutist Sherry Finzer. Continuing along the musical path of their phenomenal debut album entitled Whispers from Silence, the talented pair create sublime ethno-ambient passages on their fantastic follow-up release. Comprised of nine compositions spanning fifty-five minutes, Let There Be Light is a sonic exploration of nature’s most omnipresent element, as the duo weave electronic and organic instrumentation into a musical mandala of seemingly Zen-like mysticism and transcendent tranquility. Despite the album’s title, the pair elegantly contrast the light with shadow by blending in darker shades of mystery throughout – thereby imparting a perfectly balanced semblance of yin and yang.

“The Way of the White Clouds” opens the album with earthy drones, distant waves and acoustic textures that soon introduce a deeply resonating flute melody over subtle shamanic percussion. “First Light” ensues with an enduring drone and singing birds, as wispy flute notes convey an unbounded airiness in contrast to the earthy rootedness emitted from a continuous tonal humming. The next piece, “Timeless Journey”, is one of my favorites on the album – effectively bringing-to-mind that of a distant caravan crossing a desert at night. Here subtle Indian sitar is warmly merged with gently rhythmic bass tones, which is further complimented by the exotic scale played on flute.

“A Celebration of Life” is perhaps the album’s most pinnacle moment – eliciting a sensuous vibe that somewhat reminds me of Kamal’s “Shakuhaji Tales”. Similarly guided along by a hypnotic rhythm that underlies affecting chord progressions, Sherry’s flute seemingly acts as a coy seductress inviting the listener to move along in tandem with the sensual pulse. “Waves of Light” features a flute melody played in a higher scale amidst a backdrop of celestial washes, as if seemingly ascending to the heavens. Another highlight is the mysterious “Tides of Time”, which features what sounds like an African thumb piano lending itself as part of the piece’s gently sustained rhythm. Here breezy flute tones emerge from overarching ethereal layers, as one might imagine themselves standing alone by a seashore and feeling the cool breeze as waves roll in.

Sitting equally comfortably in both the space and world music genres, Let There Be Light is inherently trance-shamanic in nature. Tom Moore is simply a master at creating enveloping hypnotic atmospheres, while Sherry Finzer possesses a versatile range on the flute as her instrument essentially serves as narrator throughout. Earthy and grounding yet lofty and transcendental, Let There Be Light is another top-notch recording from this dynamite duo who always seem to ignite a spellbinding synergy whenever they collaborate! ~Candice Michelle

For more information please visit the artist's website. This album is also available to purchase at Amazon, iTunes and Google Play.
at January 20, 2018