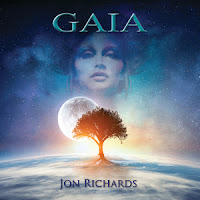 Gaia is the seventh album by Jon Richards and follow-up to his fantastic Earthlight album – both and others having been released on Medwyn Goodall’s UK-based record label, MG Music. Noted for his brand of electronic fantasy and nature themed music, Jon explores further musical ground with Gaia, interweaving styles of cinematic electronic, ambient and space music with added subtle touches of rock throughout its seven compositions, of which span just over an hour.

“Gaia Pt. 1” is a lengthy opener that unfolds like a medley at over 20 minutes. Beginning slowly with an atmospherically spacey introduction, a distant light seemingly encroaches as drifty piano notes suspend upon a droning expanse. Moving into a more melodic phase, electric guitar and a slow-paced electronic-rock beat come in for a bit, before quieting down at about the midway point with gentle thunderstorm and nature sounds. Shifting phases again, the piece becomes dreamier, more ethereal and glistening. Eventually morphing into a more sequencer-driven piece, it’s accompanied by an upbeat rhythm and some funky bass guitar that effectively convey a somewhat vintage feel.

The next piece, “Gaia Pt. 2”, is ostensibly Enigma-inspired although possessing a lighter mood, as it similarly incorporates a chilled breakbeat and flute-type instrument with brushes of electric guitar. An adventurously beautiful piece, it feels evocative of viewing earth from space, while effectively imparting a sensation of soaring above oceans and landscapes. “Earth and Sky” is a more subdued piece with a somewhat chilly air and features an oboe-type instrument over a gently sequenced undercurrent. Eventually joined along the way by processional marching drums, this regal composition seemingly paints vivid images of the cold Himalayas. The ensuing “Rhea” is one of my favorite pieces on the album and bears some resemblance to late 80’s and 90’s-era Tangerine Dream. Guided by driving sequencers and a buzzing horn-type instrument, the catchy song quickly becomes infused with a spirit-soaring quality that’s lent by electric guitars and hovering celestial voices.

“Aether” however, just might be Jon’s most stunning composition to date. Mysteriously ambient and spacey, it opens with a cold echo like the distant call of the north wind, as ensuing gentle sequencers continually spiral upwards throughout its course. Effectively bringing-to-mind the translucent colors of the aurora borealis, this mesmerizing composition evokes the wondrous beauty of a tundra sky under starlight. “Tethys” is another gentle piece that gradually nudges the listener out of the hypnotic slumber induced by the previous track. Seemingly set to the scenic backdrop of a coastal early dawn, its breezy downtempo rhythm and drifty piano notes create a sensuously chilled mood, as shimmering electric guitar textures provide extra colorful dimension.

Closing out the album is “Gaia Pt. 3”, which initially opens with piano followed by a slow electronic-rock beat. Bold electric guitars and symphonic elements convey an air of celebration, until the piece winds to a close with a softly sparkling trail of seeming fading light.

While all of Jon Richards’ previous albums having been delightfully rewarding listens, he seems to have created something extra memorable and special with Gaia. Fans especially of Medwyn Goodall, David Arkenstone and Mark Dwane should certainly check-out this album. I for one particularly love these kinds of mythical-imbued soundscapes of which Jon has certainly crafted to the finest! ~Candice Michelle

For more information check out the artist's website. This album is also available to purchase at MG Music and Amazon.
at January 02, 2018