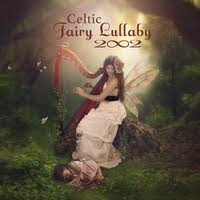 Celtic Fairy Lullaby is the follow-up to 2002’s landmark album Trail of Dreams, and once again showcases the angelic voice of Sarah Copus (daughter of 2002 husband and wife team Randy and Pamela Copus). While many listeners could easily mistake this for Enya, 2002 have their own signature sound, although similarities to the Irish singer are probably more pronounced than ever given the Celtic bent of this album, with lyrics sung in Gaelic, Welsh and English. Pure magnificent beauty seems to be the primary objective of 2002’s music, for every track on the album sparkles and shines. A pristine arrangement of both electronic and acoustic instruments is present here, with Randy on keyboards, piano, bass and guitar, and Pamela on flute and harp. Sarah provides both lead and back-up vocals as well as additional harp.

The old Irish lullaby “Seoithín Seo Hó / Gartan Mother’s Lullaby” opens the album like the soundtrack to a fairytale, with chorale washes, sweeping chimes and a cinematic quality that defines much of the music throughout. The overall sound is at once light and sweet yet richly majestic. “Cariad”, meaning “darling” in Welsh, is a beautiful ballad as well as perhaps my favorite song on the album. Led by gentle harp and vocals that are complimented by exquisite harmonizing, the piece conveys a hazy, mysterious quality. Two instrumental tracks are present on the album, of which include “Éamonn an Chnoic”, a piece based on a Robin Hood type figure of Irish history, along with the soothingly tranquil “My Singing Bird”. The album perfectly concludes with a traditional Irish song sung on May Day titled “Thugamar Féin an Samhradh Linn”, albeit presented in 2002’s signature style, of course.

Celtic Fairy Lullaby just might be 2002’s most impressive accomplishment to date. While even the most ethereal of Celtic music tends to retain a certain folksy, earthy quality, 2002 essentially stays in their airier element while lulling its listeners into a magical, dreamlike world of beauty and innocence. ~Candice Michelle