Spotlight: After the Rain by Neil Tatar 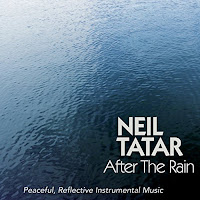 Neil Tatar is a composer, pianist and guitarist whose musical roots lie in diverse styles such as blues, R&B, light jazz and world music. Having released two previous albums, Where Did the Time Go (with cellist David Darling) and Learning to Fly, Neil’s third release, After the Rain, continues in the stylistic mode of his other contemporary instrumental works, while also softening the mood a bit in a subtle change of pace from the album’s generally livelier predecessors. Produced by Will Ackerman, Tom Eaton and himself and recorded at Will’s own Imaginary Road Studios in Vermont, After the Rain is comprised of 10 compositions spanning nearly 50 minutes, which variably features contributions by other guest musicians such Charlie Bisharat (violin), Jill Haley (English Horn), Jeff Oster (flugelhorn), Eugene Freisen (cello), Jeff Haynes (percussion), Premik Russell Tubbs (EWI) and Tony Levin (electric and NS bass).

“Gentle Steps” appropriately opens the album with gentle piano notes in the higher register that are soon joined by violin. Conveying a thoughtful tone, hence the song’s title, the melody eventually becomes a bit fuller with the two instruments yielding a crisp, clear sound as they elegantly intertwine throughout. On the next piece, “Sunsets,” Neil switches to his guitar as he’s joined by a robust ensemble of violin, soprano sax, bass and percussion. Tom Eaton additionally lends Hammond Organ while Noah Wilding provides some wordless vocal intonations. A leisurely composition with a bit of a jazz flair, it fittingly brings-to-mind that of strolling along a scenic road in the sunset.

One notable highlight on the album is “When I Was Young”, which seemingly nods at the recollection of youthful memories, with all its pleasant and often bittersweet moments flooding to mind. Guided by a gentle guitar rhythm and accompanying percussion, the composition features a lead violin melody that is further complimented by the softly understated sounds of sax, cymbals and rainsticks, as wispy vocals caressingly brush against the earthy acoustic arrangement. Following up this piece is the particularly lovely “Rush Pond” with its deeply reflective mood. Here contemplative piano notes are perfectly accentuated by violin and cello, which further lend to the composition’s solemnly graceful air.

The atmospherically mysterious “Night Walk” is easily my favorite piece on the album, beginning with EWI (electronic wind instrument) that soon introduces rhythmically paced guitar chords. I’m particularly fond of Tom Eaton’s signature haunting piano notes and ambient keyboard textures, which are sparsely placed among the nocturnal soundscape. Gentle rainstick and EWI further enhances the song’s woodsy feel, while ethereal vocal overtones seemingly allude to the presence of woodland fairies, as the occasional cymbal flickers like the glow of a firefly.

“Sidewalk Jam” wraps things up on a decidedly uplifting, carefree note with a gently rhythmic ensemble of guitar, alto sax, bass and percussion. Conveying a subtle smooth jazz vibe, a nice little jam gets going, making it a perfectly fitting conclusion to an overall contemplative album.

Another enjoyable release from a talented composer and multi-instrumentalist, I appreciated the warmly reflective and generally low-key nature of After the Rain. Indeed, this album sounds similarly like other instrumental ensemble recordings that come out of Imaginary Road Studios, so if you’re mostly or totally a fan of those works, as well as Will Ackerman’s numerous productions in general, then be certain to check out this one! ~Candice Michelle

For more information please visit the artist's website. This album can also be purchased at Amazon, iTunes and Google Play.
at January 28, 2018