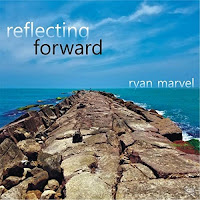 Ryan Marvel is a pianist and composer whose latest album, Reflecting Forward, consists of 14 original solo piano compositions that were inspired by a time of great personal challenge and abrupt changes for the artist. Intentionally having kept the song titles simple, most of the pieces are given just one word names, each perfectly capturing an emotion, experience or moment in time that could be likened to listening to a musical scrapbook or photo album.

The opening title piece, “Reflecting Forward”, begins with a quiet, solitary note that builds in intensity, resolving in a chord. Repeating again and then fading to silence, it is followed by gentle piano chords that bring-to-mind some of the quieter compositions of George Winston.

One especially intriguing piece is “Conflict”, which opens with what sounds like muted piano before moving into higher register chords and notes. The muted piano effect returns once again, as the arrangement builds into a song that effectively reminds me of music from Liz Story’s “Escape of the Circus Ponies”. Seemingly moving between minor key ruminations and major key celebrations on this album, Ryan displays excellent command of dynamics and compositional arranging. He patiently allows each chord to ring out on the piano and isn’t ever in a hurry, nor does he rush the compositions – and no single note on his piano is played before its turn.

The beautiful closing piece is ironically titled “Beginnings”, which subtly shifts between emotional moods and atmospheric tones. Beginning in a pensive fashion, Ryan moves on to a more assured approach to the music, before concluding in a series of gently-played upper register notes.

Authentically personal yet without revealing too many secrets, Ryan says that he hopes these pieces will resonate with listeners emotionally as well as musically – and they certainly did for me. I especially love the album’s balance of light and shadow, as well as its intriguing element of inconspicuous restraint, not to mention Ryan’s obvious penchant for composing prepossessing instrumentals! ~Candice Michelle

For more information please visit the artist's website. This album can also be purchased at Amazon, iTunes, and CD Baby.
at December 27, 2017