Album Review: Under A Second Moon By Holland Phillips 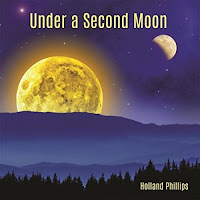 Under A Second Moon is the sixth album by multi-instrumentalist Holland Phillips and follow-up to his 2016 album, Circles of Eight. Comprised of eleven compositions spanning forty-six minutes, Holland’s latest album follows the new age / contemporary musical style of his previous releases, drawing heavily upon a distinguishable and well-worn 1980’s synthesized sound. In fact, notable comparisons could be drawn to some of the earliest works by both Yanni and David Arkenstone, as well as to a lesser degree that of Bill Douglas and Richard Souther. Throughout the album Holland plays piano, synthesizer and guitar while Paul Christensen lends saxophone to a couple of pieces. Additionally, subtle programmed beats underscore many of the arrangements.

The opening piece, “Out of the Frying Pan”, is enjoyably fey-like with its sampled wind instrument and metallic keyboard notes, as it moves at a rhythmic pace sans a definable drumbeat. Ostensibly retrospective in its essence, this piece along with others on the album seemingly convey a notion of viewing framed photos or snapshots of different scenes in time, as opposed to that of being present in the captured moments to experience them in real-time. One such example is the aptly named, “A Moment in Time”, a slightly jazz-infused number that perfectly illustrates the album’s cover painting of moonlight and landscape. Many of the compositions skew heavily sentimental, such as noted on the title piece, “Under a Second Moon”, an instrumental ballad that's accompanied by saxophone and a tender keyboard arrangement. Comparatively, I found myself most appreciating the more whimsical and fantasy-like moments on the album, such as that exemplified on “Long Way Home”, a dynamic electronic piece with a cinematic flair and easily my favorite of the lot. In my view, the 80’s-era musical influences works best on pieces such as this, with its retro guitar riffs and vintage drum programming that are further complimented by some Pat Metheny-esque vocal lines.

Rather than simply being modern music with a vintage edge, everything about these compositions – from the production, melodies, arrangements and sound quality– seemingly hails straight from the 1980’s, thereby recalling the reigning era of cassette tapes with some sense of nostalgia. An enjoyably positive listening experience overall, Under A Second Moon will likely most appeal to those who appreciate classic new age synthesizer music of the melodic and rhythmic variety! ~ Candice Michelle