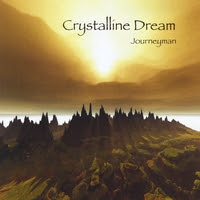 Journeyman is the follow-up release to Treshold from Crystalline Dream, where multi-instrumentalist Richard Ross provides a diverse array of keyboards, synthesizers, flutes and percussion. His talents are once again complimented by the acoustic and electric guitar contributions of Korey Ross, as well as those of Peter Phippen, who plays both Shakuhachi and Native American flutes. The sonic palette of this album is bolder and a bit more nocturnal than its predecessor, as the trio creates blissfully meditative soundscapes throughout the ten compositions on this forty-eight minute sojourn.

“Journeyman” opens with shimmering tones and distant drones accompanied by a gentle flute melody. As if emerging from space and descending the earth, spiraling textures coruscate among spacious and subtly eerie timbres that eventually dissolve into darkness. Leading us into “Serenity”, washes of synthesizers create a sonic immersion where everything feels suspended in slow motion. Initially beginning in a darker motif, “Robin in the Wind” soon morphs into a brighter piece laced with Celtic nuances, as the enchanting sounds of flute, strings and chimes create a dreamlike haze. An Eastern mystic vibe characterizes “Shadowlands” with its entrancing gong and exotic flute; it’s seemingly evocative of everything I’d envision the mythical kingdom of Shambhala to be. Gently picking up the pace a bit is “Lady of the Meadows”; this piece offers a touch of both Celtic and East Asian sensibilities, as dual melodies of flute and guitar create a beautiful simplicity throughout. The mysterious “Vassillia” is easily my favorite piece on the album, bearing an overall sacred semblance that seems to conjure images of a temple hidden within the forests. This composition features an evocative fusion of guitar and synthesizers with an array of gongs, cymbals and exotic percussion. “The Far North” imparts the essence of tundra regions with is colder airy timbres, while “The Gloaming” offers a warmer atmosphere guided by ethnic percussion. Brighter tones and spatial drones lend a celestial touch to the aptly named “Drifting” for awhile, before a reprise of the opening title track carries the listener away to an idyllic abode among the clouds.

Occasionally treading on darker terrain, Journeyman always seems to be moving towards a source of light where the quieter one’s mind becomes, the more beautiful it sounds. Accomplishing what many healing and meditation albums aspire to, it’s almost impossible not to slip way into a blissful trance while listening, nor come out of it feeling peacefully rejuvenated. Soulfully transportive and mindfully tranquil, Journeyman is an especially essential album for any massage or spa therapist’s collection. ~Candice Michelle

For more information please visit Threshold Studios. This album can also be purchased at CD Baby, Amazon and iTunes.