Spotlight: A Bridge Between by Carbe and Durand 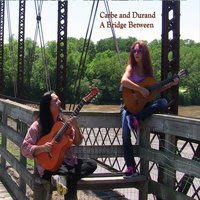 Liza Carbe and JP Durand are perhaps best known as two of the co-founders (along with Jim Stubblefield) of the world-guitar band Incendio. On the duo’s album A Bridge Between, Carbe and Durand offer up three original compositions plus ten cover songs of stylistically varied pop and rock classics that span several decades, rendering them entirely as solo acoustic guitar pieces.

The album opens with the title track “A Bridge Between”, an original composition that strums along melodically in a joyful tone. This breezy and carefree tune is evocative of driving through the countryside in the open air with its overall Americana feel. The duo’s acoustic rendition of “Scarborough Fair”, a traditional English ballad made famous by Simon and Garfunkel, is one of my favorite pieces on the album which works particularly well here. Carbe and Durand have preserved the hazy mystique of the original composition while adding an extra dose of passion employed by lovely chord progressions and unique twists on the melody. “A Thought for You” is both the fourth track on the album as well as the second original composition that seems to take the listener back on the road with its forward movement and outdoorsy appeal. One piece I found rather surprising as having been quite effectively interpreted on acoustic guitar is the Stevie Wonder hit, “Isn’t She Lovely”. Here the duo jazzes up the composition with a sophisticated allure that would deem it fitting for dancing under the moonlight to. “Mountain Song” is another one of the album’s three original compositions that bears an undercurrent of folk-rock and moves along at a melodic pace. Along with “Scarborough Fair”, the pair’s rendition of the Sting classic “Fragile” left me with the greatest impression of all. This song similarly works especially well as a solo acoustic piece, with its nocturnal romance and Mediterranean flair that would seem a fitting accompaniment for an evening at a quaint café. Lastly, the pair’s rendition of Ozzy Osourne’s “Crazy Train” makes for both an interesting album closer and follow-up to the former elegant composition, as the recognizably classic-rock tune jams along boldly and straightforwardly.

Other covers of classic hits featured on A Bridge Between include songs like Cyndi Lauper’s “Time After Time”, The Beatles’ “Blackbird” and Tears for Fears’ “Everybody Wants to Rule the World”, which variably work to greater or lesser degrees as solo acoustic renditions. Enjoyably diverse and overall compelling, fans of any number of the original compositions along with aficionados of acoustic guitar will likely appreciate the duo’s interpretations of some of their favorite songs, or perhaps savor a few of these classics in a whole new light. ~Candice Michelle

This album can be purchased at Amazon, iTunes and CD Baby.