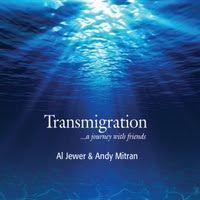 Following a string of highly-acclaimed albums that emphasized a more ethno-ambient style of music, Al Jewer and Andy Mitran turn their attention towards a more world fusion sound with a celebratory sonic journey titled Transmigration. Featuring collaborations with twenty-two talented musicians, the compositions traverse across many musical landscapes as they meet up with familiar friends along the way. Nearly all of the tracks feature the duo’s varying ethnic percussion, flutes, keyboards and synthesizers, plus each of the contributing artists’ signature instruments, which include varying kinds of flutes, bass, guitars, brass instruments, ethnic instruments, and a light sprinkling of vocals. The album comes beautifully packaged and designed, with detailed liner notes and a photo gallery showcasing most of the artists.

“Talking Stone” opens the album with the voice of Miriam Stockley, who is perhaps best known for her work with Adiemus and AOMusic. Her familiar tribal-esque vocals lend an energetic and sunny feel to the song. “First Crossing” is among the album’s more atmospheric pieces, as well as one of my favorites. The track features Jeff Pearce on electric guitar, which is beautifully complimented by marimba and subtle accordion. Other standouts include “Cloudwalker”, with Lisa Downing on piano, accompanied by native flutes and singing bowls; the glistening, nocturnal-sounding “Unfolding Path”, featuring Biff Blumfumgagne on violin; the mysterious and gently romantic “Quiet Waters”, with its delicate chimes and cymbals that are joined by Muriel Anderson on harp guitar and Sherry Finzer on alto flute; and the serene, percussion-free closing track, “Even Horizon”, featuring TC Furlong on pedal steel guitar and more violin by Biff Blumfumgagne. Other notable contributions include Jeff Oster’s flugelhorn on the more funk-driven “Council Fire”, as well as Ricky Kej on “Rendezvous”, who lends keyboards to this Indian-flavored piece, which also features vocal contributions by Karthika Lyer.

While Transmigration varies between lively festivities and tranquil moments, the overall mood is consistent and uninterrupted by musical detours. Despite the variety of artistic contributions, I was quite impressed by how the album entirely avoids veering off into overly bombastic terrain, or sounding like a mere compilation of wildly varying styles of music. Al Jewer and Andy Mitran have once again crafted an impeccably well-done offering, carving a distinctive new path in this wondrously gifted duo’s growing body of work! ~Candice Michelle

This review was originally published on Journeyscapes Radio on 03/05/16.